Biking… Well there are many different types; mountain, racing, trick and then of course there is the motorbike which I could stretch the word to include. But I think I’ll stick to the mountain bike… 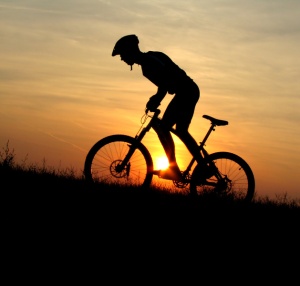 Michael is sixteen and his birthday gift is a bike. You would have thought this a funny gift for a child who ought to have been riding a bike for years, but he has never had his own. One of eight kids he is the youngest and the last, so when he is given a brand new mountain bike he immediately gets on it and cycles off. He never thinks that he won’t see his family again, he just throws a wave and is gone.

He cycles for a couple of miles and is about to turn back when he loses consciousness. Everyone loses consciousness. In the town people just drop. Airplanes fall from the sky and cars drive off the road. On the grass verge Michael lies unmoving as a car comes within inches of running him over.

Michael’s sixteenth birthday arrives and he gets a new bike, but when he cycles away he says goodbye to his family for the last time. He survives the disaster but now must survive the aftermath and find out if anyone else is still alive.